Last month Dr Damian Milton – the principal autistic advisor for the TAE project – and Becky Wood, the project manager, gave a presentation at a conference entitled ‘Globalisation of Autism: Historical, Sociological and Anthropological Reflections’ which was held at Queen Mary, University of London. This was a truly international conference, with research projects in France, Belgium, Switzerland, Uganda, Canada, Brazil, Taiwan and Bangladesh – as well as many other countries – being represented. It was extremely interesting to hear about how autism is perceived in different countries across the world, and the implications this has for research.

During the Italian multiplier event in 2016, Damian Milton answers questions about autism, while his words are translated into Italian.

As the TAE is a tri-national project, involving Greece, Italy and the UK, Becky and Damian focussed on the parallels that might exist between issues concerning language and interpretation, with the general aim to increase autistic participation in the project. For example, Damian explained how it had been necessary, during his first visit to Greece to meet the Greek autistic advisor, for there to be a three-way translation, from Greek to English and vice versa, but also to explain what an autistic person might mean which someone who is not autistic could misinterpret. Becky discussed the ways in which she had tried to increase autistic participation in the project, and considered this in the context of the theory of Communities of Practice (Wenger, 1998), which underpins the whole TAE scheme.

In the evening, there was a talk by Steve Silberman, author of ‘Neurotribes: the Legacy of Autism and the Future of Diversity’, who spoke very engagingly about how he had come to write the book and how he felt life for autistic people could be improved in the future. 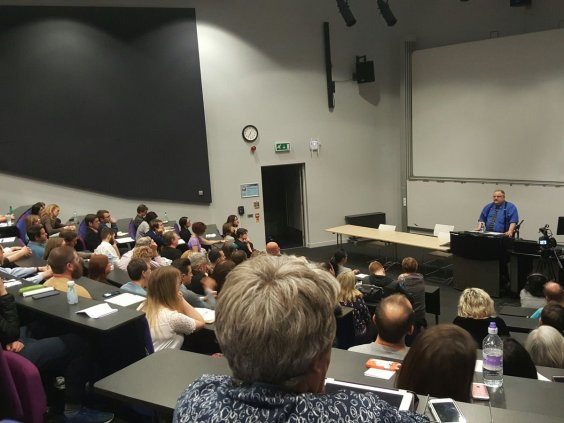 Overall, the conference underlined the fact that we must not just consider autism within narrow, national contexts, and the projects like the TAE – which comprises three different countries – are still relatively rare.

Dr Bonnie Evans, who organised the conference, also launched her book: ‘The metamorphosis of autism: A history of child development in Britain’.

2 thoughts on “Autism: a global phenomenon”